Did you ever look at season one Daenerys Targaryen, dirt smeared across her cheeks in the midst of turmoil, and wonder how she still looked like an ethereal goddess? Surely if we were also prisoners of the Khalasar (a totally normal predicament we often find ourselves in), our brows wouldn’t be nearly as impressive as hers. Still, the same holds true for most television shows—despite hours on set, various plot twists and turns, as well as an almost-too-real ever-increasing television definition, actors and actresses still turn out with their makeup completely unscathed and without so much as a pore showing.

That, my friends, is thanks to the magic of television makeup—and the artists behind it. 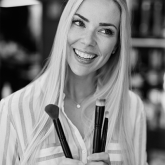